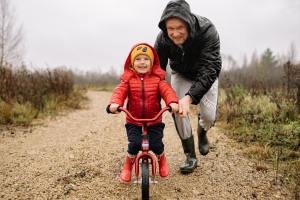 I was nine when the shrill ring of the phone ripped through our sleeping household. Even at nine, I knew it couldn’t be good news and a shiver ran down my spine. A light flicked on in the hallway and my mother hurried to the phone in the kitchen. A few minutes later she returned to her bedroom and told my father, “Yvon went and killed himself.”

My mother’s first language is French.  In French, you can say, “Il s’est tué dans un accident,” which translates as “He killed himself in an accident.”  It’s not an elegant turn of phrase but, had my mother said THAT to my father, I would have understood that my cousin hadn’t committed suicide. She translated quickly for him, though, because he never could get the hang of the French language. So I lay in the dark wondering what could have made Yvon want to kill himself.

It was only the next morning that I got the right story. Yvon was riding on the back of a motorcycle when it collided with a car at an intersection. He flew off the bike, his head connected with the pavement and he died on the spot. He was 17 years old.

The day after he died, his sister, Diane, stayed with us while her parents made funeral arrangements for their son. Diane and I were the same age and we were close.  We spent most of the afternoon sprawled on the floor coloring. I had so many questions that I couldn’t bring myself to ask her. Did she think riding a motorcycle was like riding a bike? What could Yvon have been thinking as he hurtled through the air?  Did he have time to think of anything at all? Did he feel free, body untethered to anything on this earth for a few seconds? Did he know this would be his last taste of freedom and life?

Finally, Diane asked so quietly I almost didn’t hear her, “Do you know about Yvon?”

“Yes,” I answered. We kept coloring and didn’t talk about him again.

Chaos broke out on the day of the funeral when we were asked to leave the viewing room so the casket could be closed. The funeral residence was filled with teenagers who were friends of Yvon’s and two of his sisters. As we were ushered out, Yvon’s girlfriend stood by his casket and let out a piercing scream followed by almost inhuman wailing. She was quickly circled by friends who murmured comforting words and helped her outside.

My mother was outraged. Her sister, my Aunt Jacqueline, and my Uncle Gérard had been stoic throughout the three days of visitation before their son’s funeral. “That girl has no business carrying on that way,” my mother whispered to my father while anxiously looking at my aunt. Diane and I stood forlornly by our respective parents and exchanged bewildered looks across the room.

I remember Yvon so well because he’s the one who taught me to ride a bike. Over and over again, he ran behind me, holding onto the back of the seat while my legs pumped the pedals. And, over and over again, when he let go I toppled over. Until one day, I didn’t.

That day, as always, I heard Yvon breathing heavily as he ran behind me, his hand latched to my bicycle seat. We were on the country road at his parents’ cottage and as the gravel crunched beneath my tires, I knew this time was different. “You can let go!” I shouted. Nothing happened so I yelled again, “Let go!” as only a bossy, six-year-old girl can. When I didn’t hear him panting or the soft thud of his feet on the road, I glanced over my shoulder. He wasn’t there. I gingerly hit the brakes, rolled to a stop and turned to look back. There was Yvon in the distance, waving and clapping.

I was jubilant. I sensed more than understood that this was a subtle form of separation, a tiny step away from my parents and toward independence. It was the best feeling in the world.

Years later, I was the one running behind, holding on to the back of their seats when I taught my kids to ride their bikes.  And this time I understood exactly what it meant. Each new triumph – crawling, walking and now biking – meant they needed me a little bit less. And each one came with more things to worry about.

As I ran behind them, part of me badly wanted to see the look of pride and joy on their faces after their first solo ride. Another part of me wanted to hold onto the back of those seats forever.